We welcome both individuals and corporations to help support the Franklin Band Boosters by becoming a sponsor.
Becoming a sponsor is easy. Simply select a sponsorship level, fill out the sponsorship request form located here, and mail the form and payment to our mailing address.  All contributions to our sponsorship program are 100% tax deductible as a charitable contribution to a 501c3 organization.

If you have some specific questions about the program that are not covered on this page, please feel free to call or email. We are always happy to talk with our neighbors, especially when the conversation is about how to help our Franklin Patriot musicians.

The following chart summarizes the benefits of the different levels of sponsorship.  Each level provides your business with a chance to be recognized in the local community as a support of our student musicians and their musical education. 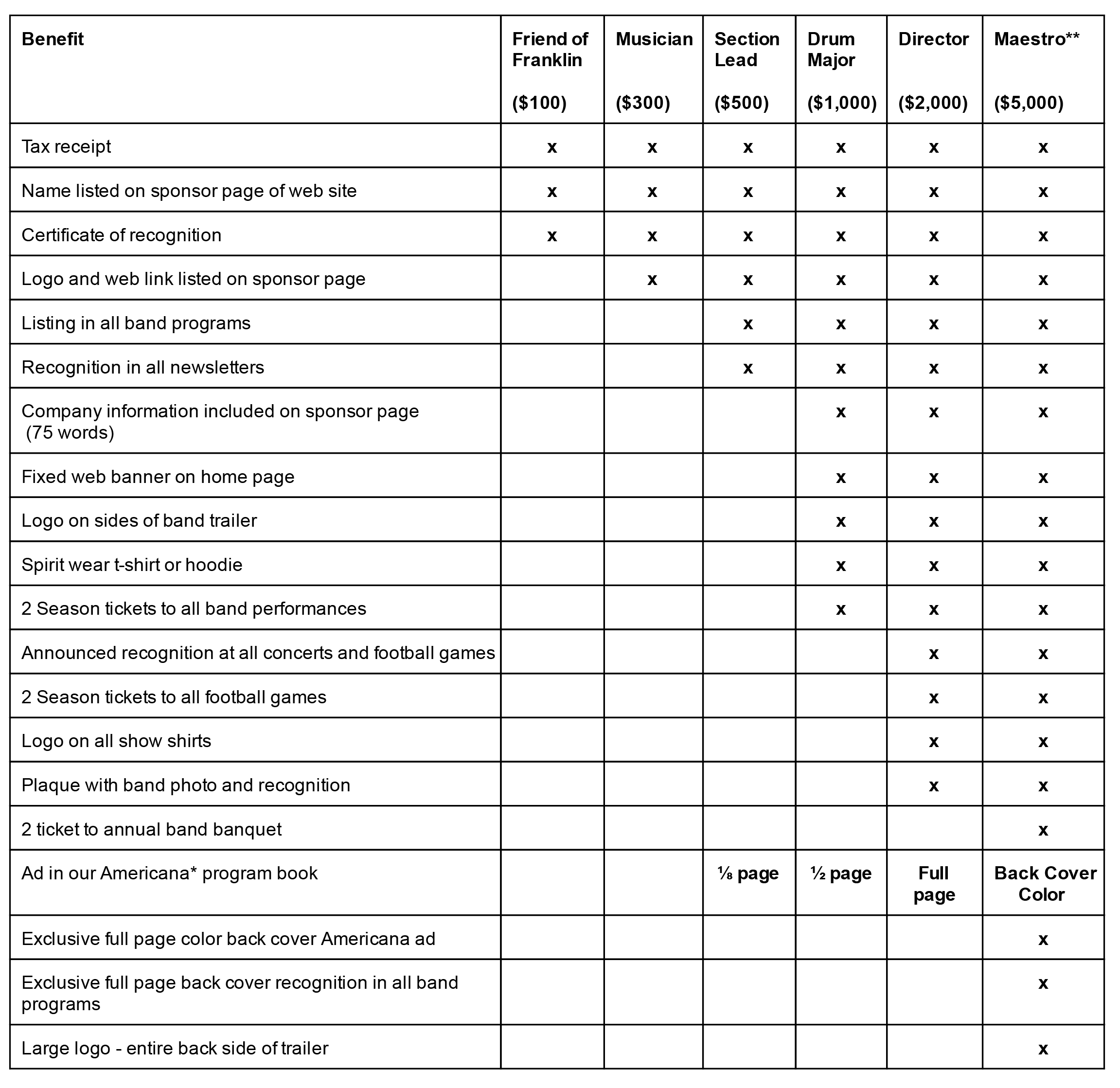 What do the Boosters do?

The Livonia Franklin Band Boosters is a non-profit 501(c)(3) organization that supports all of the music programs and students at Franklin High School via the year round involvement of volunteers and financial support to keep all programs operating. The boosters help pay for new instruments, repairs for broken equipment, new sheet music, salaries for instructors,  transportation to events, provide band camp scholarships; drill design for the marching band,  and camp fees for our drum majors.

Don’t my tax dollars pay for the music program?

Yes, public tax dollars do provide support the basic instrumental classes at Franklin.  It does not include support for the marching band or color guard,  The band boosters goal is to enhance the music program beyond the basic music classes.  For example,  there is a fixed budget of tax dollars used for instrument repairs.   Once these funds are exhausted, instrument repairs come to a halt.  Earlier this winter, one of the school’s tubas had degraded to the point it became unplayable.  The remaining school budget would not cover the repairs for this instrument.  The boosters were able to fund this repair and get it back into the hands of a student instead of sitting in the “to be repaired” pile.

Why start a sponsorship program now?

In the past, we could rely upon a few relatively secure funding sources to augment the band’s funding needs. Our primary sources of revenue came from hosting the Solo & Ensemble Festival. For 30 years this festival was hosted by Franklin High School and provided nearly 50% of our fundraising income. Unfortunately, in 2016 this festival was moved to a different school district. This sponsorship program is an attempt to make up for the loss of this revenue.

What would my support be used for?

There are four major needs that the boosters would like to support.

1. Purchase new uniforms for the marching band. The current band jackets are older than the incoming freshmen that will be wearing them. For a band uniform, this in ancient.  There is a desperate need to replace these uniforms as soon as possible.

2. Purchasing a new instrument trailer. Our large equipment trailer was retired in 2016. After two decades of service it rusted to the point that is was no longer safe to transport musical instruments. Until we can obtain a new trailer, we will need to rent trucks to travel to events.

3. Funding the scholarship program.  Not every student interested in participating in the marching band is able to afford the camp and participation fees. Our goal is to raise enough funds to ensure that any student musician that has the will and desire to march as a patriot is given the opportunity to do so.

4. Fill the gap in the operating budget. We do not have enough funding to cover all of the annual costs necessary to operate a marching band, flag corp, and other musical events at the same level that we could before the loss of the Solo & Ensemble festival.

What are your fundraising goals for the Sponsorship Program?

Our target is to raise $35,000 with the Sponsorship program.  This would allow us to acquire new uniforms, a trailer, fund our scholarship program, and cover the hole in our operational budget.

How does the Franklin Band Boosters budget compare to other schools?

We pride ourselves on being the little band program that could.  We are only one of about 60 schools in the state that supports a competitive marching band participating in the Michigan Competitive Band Association. (MCBA).   Similar sized schools that also participate in the MCBA competitions do so with a budget that is 80% to 900% larger than ours.
The Franklin band boosters supports donations of any amount via our partnership with PayPal.  Simply click on the donate button below to make a tax deductible donation to our 501c3 charitable organization.

Please contact me about becoming a sponsor
Thank you! Your submission has been received!
Oops! Something went wrong while submitting the form